Losing the plot, the cemetery enthusiast, Gretchen Rubin, and a hairtastrophe

I’ve been thinking about plot. A lot. Is plot essential? I believe so. Story is plot. Plot is inherent in story. When readers complain about the books they haven’t enjoyed, they will often say, “It just didn’t go anywhere. I got bored.” Readers want to dive in to story. As in life, we want to be enchanted, entertained, and most importantly, to be taken on a journey.

So. How do we work with plot? Occasionally, and if we’re very lucky, the plot is the central idea or vision we begin with when we sit down to write. The plot will dictate to us the types of characters we’ll create, and the situations we’ll put them in. Some very clever people decide on their plot before they get stuck into writing a first draft. However, a complete and fully fledged plot will not often arrive into our imaginations. More often than not, we’re compelled to write when inspired by a theme, a character, or even a place. Writing is so often about delayed gratification, and when we start out with the abstract, it can take time for a narrative shape to emerge. Consequently, our initial efforts can seem slack, or pointless even, until the plot slowly comes together. It’s worth mentioning that we don’t always refine or perfect plot in a first draft, and it can take several drafts for a plot to assimilate successfully. A first draft does not a novel make.

One of the dangers of writing without planning is that we’re at risk of developing copious narrative threads. We think we’re on a roll, but we’re out of control. Narrative threads require development and fulfilment. They set us up for a lot of work. It’s also very tempting to continue to write on, reluctant to stop and assess what we are writing and why. It can be so affirming to see that word count building up, but this can also breed a false confidence. Our work can become more complex and scattered than we’d like it to be. We can plot ourselves into a knot. It becomes hard to see the wood for the trees, because we’ve planted too many trees. We need to ask ourselves if we have the ideas and the stamina to address so many complications and tangents. To create good plot, we need to stay mindful. Every step of the way.

How to tease out the plot in your novel in progress

My recommendation is to let the words you’ve written settle awhile. Put the draft in a drawer for a month. Two months. Three is even better, though I wouldn’t leave it much longer than that. When you return to your draft, cast a cold critical eye. Keep that which is compelling. Hold on to the gold. Pick up the narrative threads that feel right, and read right. Track them. Highlight them. Consider bullet pointing every line to ensure that you’re maintaining a strong and focused flow between one line and the next. This will help you to pinpoint when you’re going off the beaten track, and it’ll also help you to keep your story clean (and by clean, I mean focused and structurally sound). Aim for cohesion and balance, and you won’t go far wrong.

A friend and I paid a visit to Glasnevin Cemetery recently. We arrived too late to take a cemetery tour. We meandered around, appreciating the peaceful atmosphere and the interesting grave markers and headstones. As the late afternoon drew darker and colder, a man approached us. He asked if we were out for a walk and we explained that we’d missed the tour of the cemetery. The man, let’s call him Harry, was holding the most curious notebook I’ve ever seen; thick with photocopied maps, wads of notes, and handwritten biographies. Before we knew it, we were being taken on an impromptu and very unorthodox tour of the cemetery. Harry brought us to numerous gravesites, including that of murder victim Maria Kirwan, wife of painter William Burke Kirwan. In 1852, William was put on trial for Maria’s murder, accused of drowning her on Ireland’s Eye. (The murder mystery is detailed in this Irish Times piece.) We visited the grave of a mother and her five children who were wiped out in a matter of hours having consumed contaminated shellfish in an incident that became known as the Seapoint Tragedy. We visited the gravesite of the Neilan brothers who fought on opposite sites during the Irish Civil War, but are buried together in the family plot. My friend and I were captivated with all of the Glasnevin lore Harry shared with us.

Harry told us he’s been visiting Glasnevin Cemetery almost daily over several years, working on reading the inscription on every gravestone in the place. He told us he’d been in the cemetery until 2am the night before, reading inscriptions with a torch. He says he has never seen a supernatural entity in the graveyard in all the many years he’s been visiting. He says everyone’s fast asleep. As night fell, we thanked Harry sincerely for the tour, and he sauntered away with his torch and notebook, no doubt looking forward to another night spent reading inscriptions and poking about in the sleeping cemetery.

If you’d like to learn more about Dublin’s graveyards, the late Shane MacThomais, a historian in Glasnevin Cemetery for many years, wrote a book called Dead Interesting that’s available on Amazon. Director Aoife Kelleher also made this astonishing documentary about the cemetery, called One Million Dubliners, also available on Amazon.

I confess. I am a Gretchen Geek. Gretchen Rubin is a New York Times bestselling author. Her books The Happiness Project, Happier At Home, Better Than Before, and now The Four Tendencies have proved wildly popular across the globe. (You can find her author page on Amazon here.) Gretchen’s put forward a whole ream of intriguing ideas as to how we might be happier and more satisfied with our lives. For me, the best thing about Gretchen is that she is unashamedly herself. She happily admits to enjoying children’s literature, and to going sober (drinking used to cause her to become belligerent and argumentative, she says). Gretchen is open about the fact that she doesn’t read reviews or articles pertaining to her or her work, as it doesn’t lend itself to good writing. It must take great discipline to not read that material, knowing that it’s more than likely out there. I also think it’s very courageous of her to share her strengths and weaknesses and individuality with millions of readers. Gretchen’s books are peppered with honest anecdotes about failure and experimentation in her own life.

Anyway, Gretchen recently visited Dublin to promote her book The Four Tendencies. I was fortunate to be able to meet her in person. As she began signing a book for me, I was so star-struck that I muddled up with telling her the spelling of my own name, meaning that she had to go ahead and sign a second fresh book for me. Yikes. Still, I was incredibly chuffed to meet her, and I have to compliment Irish Town and Country Magazine who organised the event; it ran really smoothly, Gretchen gave a terrific and engaging talk, and the event was great value for money.

I made a gross error of judgment by putting L’Oreal Colorista Blue Washout Colour in my blond hair at the start of November. Why. Oh God Why. Within a week, it had faded to a horrid neon green colour that refused to wash out, even though the product is marketed as a wash out product. They lie! Three weeks in and I’d tried Fairy Liquid, Head and Shoulders, and even ordered some suspicious foul smelling chemicals off the internet in an effort to remove the green staining from my hair. No luck. Literally nothing worked. I went to see my usual hair colourist to consult with him about next steps and he clapped his hands on his cheeks and said, ”What have you done!”

He explained that I would likely have to cut out most of the green colour, as it was unlikely to completely fade. He said he could try to lift it using bleach but there were no guarantees as to how it would turn it out. By this point, I had nothing to lose. The colourist sat me in a chair by a sink and slathered bleach on my head, and then he called for more bleach! An assistant joked that his nose hairs were being burnt off with the fumes. There was a call for more bleach! and we all waited with bated breath to see how my hair was going to look. Thankfully, the green colour did lift, and there are only a few streaks left behind, sort of like someone’s run a toothbrush loaded with toothpaste through my hair a couple of times. I’ve had about two inches cut off the length, and it’s never been so short. Still, I feel that the colourist achieved a miracle in returning my hair to a presentable state. He even managed to re-highlight my hair afterwards. I just wanted to share my experience to serve as a warning to anyone clutching that tube of Colorista in their hand, about to do the deed. If you have blond hair, do not use this product, unless you’re prepared to deal with having neon green hair for several months. 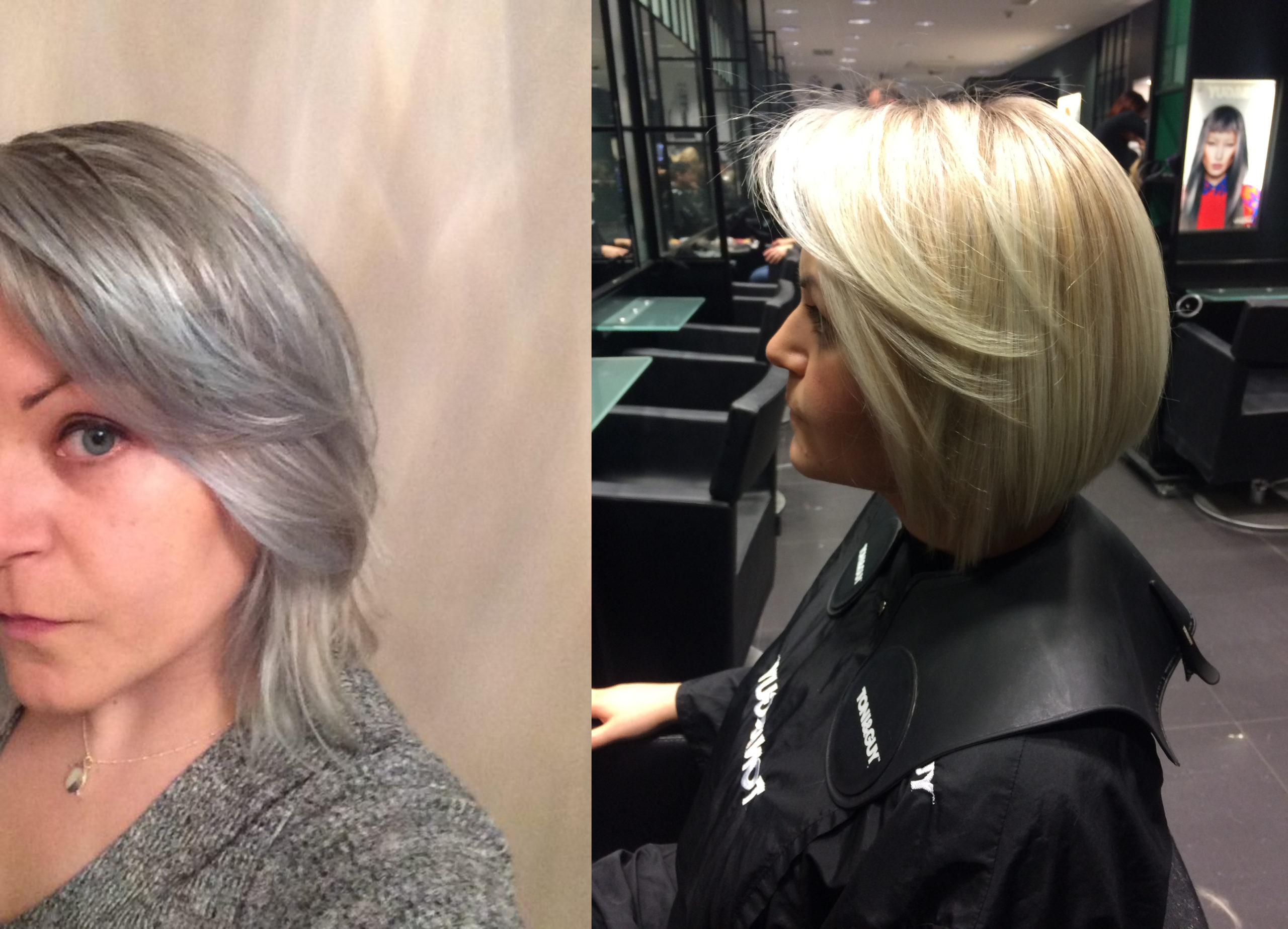